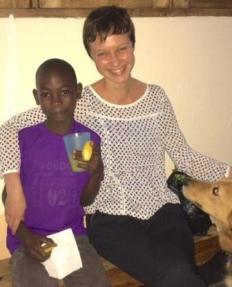 I had been hoping that the opportunity to work in somewhere like the Rock would come to life for a few years. I don’t think I dared to think of it being possible, until WTA and the Rock were introduced to me by a work colleague, and I had the pleasure of corresponding with and meeting Elspeth for a very special lunch that would change the course of the coming year.

Emails and messages later…..I was there! I was warmly greeted at nearly midnight by Johannes and Ge (project guardians). I was made to feel welcome and feel immediately at home. Not a word of apology was accepted by either my new hosts or the kind driver who had brought me door to door from Entebbe through immense Ugandan traffic! As I was travelling alone, that first impression was incredibly reassuring and I deeply knew the Lord had His arms around the visit. I was treated so well, fed so well, and no worry was too small or big to talk about with Johannes and Gé, Jerry and Elspeth. I will treasure the laughs and chats!

While there, although just for two weeks, I had the opportunity to work with a team in the Rock who welcomed me without hesitation. The work itself was widely variable from seeing patients from the school and community, to getting involved in the health education side of things, to even testing eyes! Malaria, brucellosis, and typhoid were just some examples of the serious illness that would be difficult for the immediate community to find help for, and they would have to travel in sickness were it not for the resources available in the Rock. They were ready not just to treat whoever and whatever came through their door with kindness and real care, but also have the community’s trust and friendship through reaching out to them. I was impressed by their closeness with each other and the students. The care that they have as a clinic for the students’ welfare now and in the future was evident through Annette’s wisdom and gentleness as a manager. The drive to keep teaching and guiding their lifestyle choices through health education was clear in the three staff: Derrick (the clinical officer), Molly and Gideon. They were a pleasure and inspiration to work with.

It was a privilege to work in the Rock for that short time. Uganda is incredibly beautiful, and an amazing, interesting place. I thank God that His wisdom and care is prevalent in this special community at WTA, and only hope I can come back soon!