A car crash in slow motion 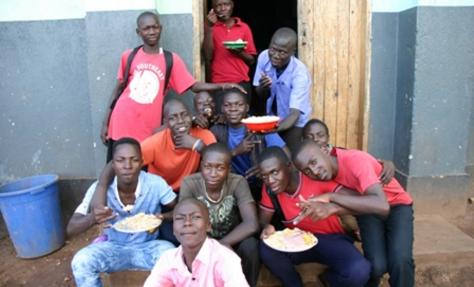 And just when things were all going along quite smoothly at Wobulenzi Town Academy......along comes another crisis unfolding before our eyes.....it really is like watching a car crash that is about to happen right under your nose in slow motion.

It has been very hot in Uganda - and very dry. Normally the rains start at the beginning of March. This year they started at the end of April. Nearly 2 months late. Any crops that were planted at the normal time dried up. The land is parched. To make matters worse, any rain that is on it's way is forecast to be way below average. Amazingly, after just a few days of rain, everything is now fantastically green again, masking a crisis that is likely to happen.

Over the past few weeks, we have been in discussions with Charles and the senior management team about next term. Huge concerns over money and student numbers. Why? Agriculture accounts for about 75% of employment in Uganda (source USAID). There is widespread concern that food is going to run out later this year. Obviously in severe cases this brings famine - but it also effects everyone else with a double whammy as food prices both rise and earning potentials go down - which also means no money for extras like school fees....

In the last 2 weeks of term, maize prices rose by over 50%. Maize forms the staple diet of everyone's food - 3 times a day. It was sobering to note that WTA was the only boarding secondary school in the area still open at the end of term, some had closed as early as 4 weeks before, as they had nothing left to eat. All credit to the WTA  management team for careful planning and controls, but they can only do so much before the crisis hits home.

To help WTA through this crisis, ServeDirect has already given a short term loan, helping them to secure prices for a large proportion of their food for next term. But there will be a shortfall - and at the moment no-one can firmly predict how large the 'hole' in the food budget will be. If you can help with a one off donation, please click on the Donate button at the top right of this page (quote food as a reference) or email me for more information, jerry@servedirect.org

We are certainly very fortunate where we live....

The worst affected areas look to be South Sudan, Northern Kenya, Somalia and Northern Uganda. Here is a recent article from the Uganda newspaper The Daily Monitor published 25th April 2019.

'Region braces for tough times as food crisis is forecast'

Uganda and Tanzania accounted for 57 per cent and 32 per cent of total maize exports. Government data shows that the cost of living rose the most in Kenya during the first quarter (January-March) of this year at 4.39 per cent, followed by Tanzania (3.03 per cent), Uganda (2.9 per cent) and Rwanda (1.3 per cent).
East African countries are facing a food supply crisis, which is bound to increase the cost of living and push up governments’ budget deficits this year.

Much of the region has gone through a dry spell after the delay of the long rains (March-May), with poor harvests forecast. While the region’s average cost of living remained relatively unchanged during the three months to March, inadequate food supply and rising oil prices may lead to higher inflation in the coming months.

The average overall inflation for Kenya, Tanzania, Uganda and Rwanda during the three months to March 2019 was 2.9 per cent, down from 2.93 per cent in the same period last year.

World Bank Kenya country director Felipe Jaramillo said that delays in the long rains and a growing need for emergency interventions to deal with food shortages “is a reminder of the outstanding challenges in managing agricultural risks in Kenya.”

In Uganda, the Bank of Uganda said the weakening shilling and weather-related constraints to agricultural production are impacting the country’s inflation.

“The risks to the inflation outlook include the direction of crop prices in the wake of uncertain weather conditions, the strengthening of domestic aggregate demand, and the path of the exchange rate,” said BoU Governor Emmanuel Tumusiime-Mutebile.

Some 23.4 million people are currently food insecure in the Greater Horn of Africa. They include 10.7 million people already starving across Somalia, Kenya, Ethiopia and Karamoja region in Uganda.

The Food Security and Nutrition Working Group (FSNWG), a regional platform of the Inter-Governmental Authority on Development (Igad) and the Food and Agriculture Organisation, says that although the food insecure population is lower than that of 2017 (15.3 million), there is a high risk of a worsening situation due to rainfall deficits.

More than four million children will need support for acute malnutrition: 2.76 million under-fives in Ethiopia, 903,086 in Somalia and 54,309 in Kenya.

Some three million pregnant and breastfeeding women are also at risk of malnutrition.

Igad executive secretary Mahboub Maalim said that in Karamoja region alone, about 250,000 agro-pastoral people and their animals are currently in food distress. The Authority has now put in place contingency plans for water and food.

The delay in the start of the March to May long rains, coupled with forecast rainfall deficits, comes in the wake of already dry conditions due to poor October to December 2018 rains over some parts of the Greater Horn of Africa. The poor short rains led to below-average crop production and deteriorating pastures in some agro-pastoral and marginal mixed farming areas.

Analyses show that rainfall levels through mid-April are likely to be the lowest on record since 1981 in some areas, particularly in southern Kenya, much of Somalia, the Somali Regional State of Ethiopia, and northern Uganda.

Rainfall predictions until May 31 suggest that parts of the region will receive below-average rainfall.

According to Kenya’s Meteorological Department, the forecast for the remainder of the season indicates that most of the country will continue to be dry for the rest of April.

The west of the country is, however, expected to receive isolated rainfall over a few places. The rainfall is however forecast to have long dry spells in between episodes, and the amounts are expected to be minimal.

The projection for May indicates that most parts of the country will receive below-average rainfall apart from the west of the country.

In early May, there are chances of isolated storms that may cause flash floods over low-lying areas. The western and coastal strips may continue to experience isolated rainfall over a few places up to the beginning of June.

Cyril Ferrand, the resilience team leader at the FAO Sub-Regional Office for Eastern Africa, said that of the planned $22 billion global humanitarian fund for 2019, East African would get $2.5 billion to mitigate against the effects of the drought.

The FSNWG report predicts an increase in food insecurity and livestock movement, likely to peak from June to October. Northeastern Kenya, south and central Somalia and south and eastern Ethiopia are likely to experience a rapid decline in pastoral conditions.

“Dry conditions and high temperatures between January and March have already led to deterioration of pasture and water availability in these areas, affecting livestock conditions, reducing milk production, driving pastoralists to keep their livestock in dry grazing areas for a prolonged period, stressing limited pastoral resources and increasing the risk of conflict in receiving areas,” says the report.

The Uganda-Kenya border, where pastoral conditions are expected to remain acceptable, could suffer from possible competition over resources and may result in conflict.

Crop production could also be below average in marginal agricultural areas of Kenya, Somalia and Ethiopia. Along with the lower than average crop production of Uganda and Tanzania, this could cause price increases, thus reducing access to basic food supplies for poor households.

According to the latest East Africa Cross-border Trade Bulletin, Uganda, Tanzania and Ethiopia are key suppliers of maize, rice and beans to other parts of the region. Uganda also supplies sorghum.

According to the report, regional supplies of sorghum, maize, rice, and dry beans are expected to tighten in the first and second quarters of 2019.

Uganda usually has two maize harvests each year, and Tanzania’s May and August harvests have played a major role in stabilising the prices of the commodity in the region.

Tanzania’s maize exports to Kenya, especially from the main producing southern regions where prices are lower, were projected to increase in the first quarter and peak in the second quarter of this year. The estimated volume of maize grain traded in the region in the fourth quarter (October-December) of 2018 was 111,000 tonnes.

Uganda and Tanzania accounted for 57 per cent and 32 per cent of total maize exports. Government data shows that the cost of living rose the most in Kenya during the first quarter (January-March) of this year at 4.39 per cent, followed by Tanzania (3.03 per cent), Uganda (2.9 per cent) and Rwanda (1.3 per cent).