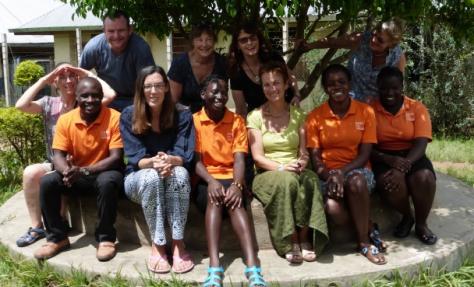 Team ServeDirect and Days For Girls

In October, the leading ServeDirect article was 'Keeping Girls in Schools and Talking Pants'. Two months later, we can safely and 'briefly' (!) write that the November 'Freedom 4 Girls Team' have well and truly delivered the pant project.

Team 'Pants' arrived at Entebbe with about 2,500 pairs of pants.... which leads to interesting conversations at customs without a doubt. The original aim was to collect about 700 pairs in a joint effort between the July team and this team. Thanks to the generosity of so many and the creative fundraising of both teams, the target was easily surpassed. Pants arrived from all over Hampshire, via the local newspaper, by post, were delivered to the team's houses and collected in churches. The idea really grabbed everyone's imagination and M&S shares have definitely gone up... they also made a great donation! This enabled the distribution of underwear and menstrual kits for girls to be handed out -  not only to the WTA secondary girls, but also to the entire primary girl community, to their women teachers and to many others in the community. 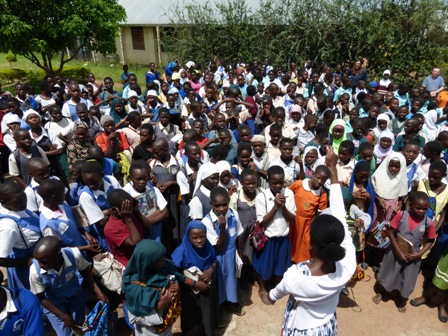 Despite the endless mileage of underwear and knicker jokes, the subject of pants - or rather the lack of them  - is a very serious and humiliating business in rural Uganda. Many women and girls only own one pair.... which makes life and managing periods a really difficult and unpleasant issue. Many girls fail to complete primary school, many girls don't make it to secondary school and a shocking number simply drop out of school all together as they can't practically afford pads and pants. Sad but true. Furthermore, many cheaply available, Chinese-made disposable pads contain harmful chemicals which disintegrate and burn delicate skin. These would not even be allowed to be imported into Europe and the US. At the end of the day, this is quite simply another form of economic segregation and oppression from China to Africa.

Days for Girls, a Ugandan NGO which specialises and excels in solutions for this problem, came to WTA to deliver a phenomenal 3 day programme at WTA, with the UK ServeDirect team in support role. During this time, they delivered an extensive health education programme to the WTA community, taught all the girls to make their own reusable pads and bags and then distributed full kits to everyone. They followed this up with a distribution to all the primary girls from P4 - P7.  Inspired by this, Teacher Brenda from The Bridge then organised her own training for all the primary teachers - which was an unexpected bonus and a real success. Teacher Solome initiated her own training for all the leaving S6 girls (who had been busy with final A levels) and who would otherwise have missed out. We also gave each S6 girl income-generating packs of pants to sell or distribute themselves in their own village communities. Other sets were handed out to marginalised women in Lukomera, and to some girls and young women living with complex disabilities, also from the local community. 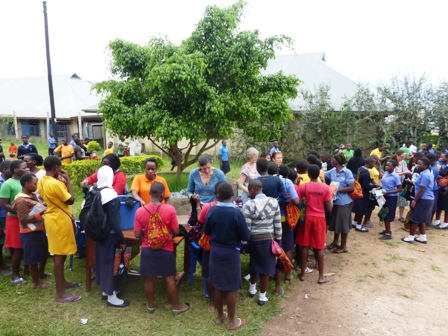 In truth, we knew it would be likely to be well received, but the real impact and effect on the community is now coming to light, via feedback coming through to Charles and the local teachers. The issue of keeping girls in school - and how it raises a whole community and builds futures is difficult for us to really appreciate. And it continues to have a ripple effect beyond Lukomera itself.

Of course, the store room is still full of bags containing hundreds of undies... but they are not going to be stored for long! Some are going to The Rock for their patients, for the elderly and for ante-natal care. Furthermore, next term, when the new girls arrive for S1 and S5, Annett and her staff at The Rock will be ready and waiting...... prepared with pants! 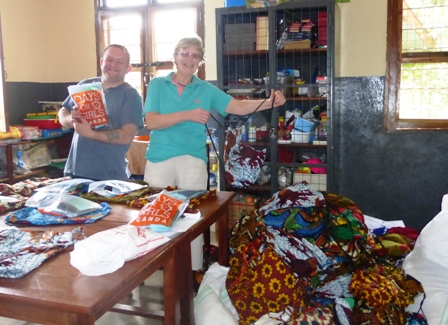 Aside from this focus, the team were fully involved in the end of term programme, getting to know the students via craft, talks, discussions, training, music, sport and so many other activities. As we write, they are probably completely exhausted, having participated with immense dedication and energy, right to the last minute - but they can be confident that they have left a long lasting and brilliant legacy in an entire community of girls and women here. Special thanks to Sarah, Caroline, Tasha, Alena, Will and Fiona for putting the pant project into practice. 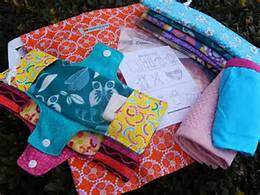